Prime Minister of Greece, the issue of the name of Skopje must be decided by the Greek people!

The cοmpound name proposed by our country with a geographical definition will complicate things. It is heard a lot in recent years from many of our country’s politicians, but it did not bend the Fake-Macedonians fanaticism. Skopje continues the politics of statues, alleged monuments, claiming non-existent minorities, for which they spend hundreds of millions of
euros while their citizens are in dire economic condition.

As a result, there is a big reaction inside the country and, in combination with the scandals involving the waste of public money,it will soon lead Skopje into very serious political developments, in which the Albanian minority party «DUI» will star. Since 1991 they have not backed down to the issue of the name ,so the question that arises is: Why should we back down?
When you back down in front of a weak neighbor then what messages do you send to the strongest and most threatening neighbors?
The issue is not seen in a nationalist way by us but it is by them !
So we have to look at it in its true dimension, keeping in mind that from 1991 until now Skopje did not compromise or back down at all and continue their irredentist propaganda.

What do we have to do:

Let`s return to the position of Constantine Karamanlis and the political leaders of 1992. No concession of the term Macedonia as a derivative or compound. The Skopje state in a few years will probably not exist.
The nationalism of the Albanians, which make up the 30% of the population,will lead sooner or later to break-up. The Albanians took the weapons in 2001 and in May of 2015 and they co-exist with the Slavs through violence. They want to unite with their co-nationals of the independent Kosovo.

Feeling the threat, the Slavs turn to the acquisition of Bulgarian citizenship and about 250,000 have already acquired it. Artificial nations have no future!
The complex name does not solve the essential problem that is identity.
If, with our signature, the Skopjans will be named internationally «Upper» or «Northern» Macedonia or something like that, then in a few years they will be established worldwide as Macedonians and heirs of the Greek-Macedonian civilization and, in combination with the territorial claims against Greece,imagine what could happen! ! !
We are protesting about what they do, because we have not put our signature yet . But if we sign the concession, how will the Skopian territorial and cultural claims against Greece be blocked?
Millions of Greek Macedonians will not be able to use this historical term. We will be NorthernThessalians or something similar.

No concession of the term Macedonia as a derivative or compound because it will create nationalistic outbursts resulting in destabilization in the Balkans.
So simple, so clear!
The SYRIZA-ANEL government must do the obvious, the matter concerns the future of the country, …. Ask the Greek people!

Were opened the gates of hell 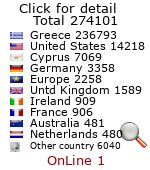